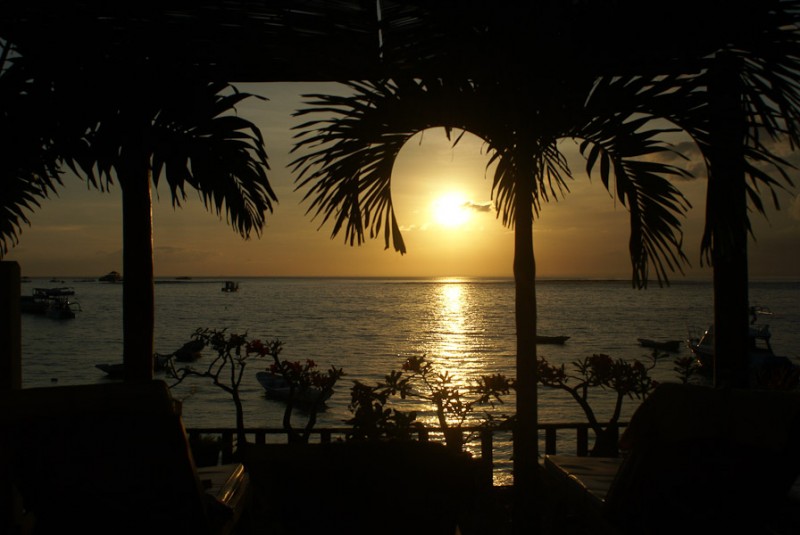 Scuba diving, mountaineering and a bit of culture for more than four weeks.

With a questioning glance Christian and I were waiting at Vienna’s airport and discussing how to charge our cameras, IPods, etc. in the next four and a half weeks. Instead of studying guidebooks over the last weeks we rather went kayaking. Just to be sure we decided to buy the “world universal adaptor” at an exorbitant price.

The flight to Jakarta was uneventful as expected. So we had enough time to inform ourselves about basic facts as language and currency and to decide where we actually wanted to start our trip. But even after reading the “Lonely Planet” from the beginning to the end and back we were not able to make up our mind. The unbelievable hustle and bustle of Jakarta aroused in us the need of tranquillity and loneliness. So after exchanging money we directly headed towards the southwest of Java by public transport. Ujung Kulon was our first pick. According to the guidebooks this was supposed to be a very remote national park. The plan was to hike and explore the jungle for some days. After a very long and tiring bus ride we arrived completely knackered in Labuan the last bigger town before the national park. Here the trip nearly came to an unexpected end before it had actually really started.

As we were walking on very dark and dodgy roads on our search for cheap accommodation I suddenly stepped into nowhere and found myself in a stinky and muddy sewage channel. Manhole covers are not that common in Indonesia.

The following days Christian, I and our obligatory guides Dede and Watchet were hiking through the jungle. On that hike there was no possibility for re-supplying so we had to carry all our food in our backpacks. Dinner was upgraded with fresh fish, mussels and roots. Prepared on the open fire the meals always were a culinary delight. Our so-called tropic proofed hammocks were only of little help because bothersome pests as mosquitos, bugs, etc. just stung and bit through it. We had to walk in suffocating heat, storms and in the deepest night. Once the flood took us by surprise and to get back to camp we had to wade seawater in darkness for long.

After that cool trip we took the train to get down to Yogyakarta. To explore “Yogya” we rented two motorbikes and also used them to cover the 40km to get to the famous temple of “Borobodur”.  After the days in the jungle we definitely enjoyed the luxury of bars and restaurants but nevertheless we booked our tickets to Bali – Denpasar just after two days in Yogya. A ferry took us from Bali to Nusa Lembongan, an island a bit of the coast. There we had some great days, learnt how to scuba dive and were invited to a kick ass barbecue with our dive instructors. On our dives we came across manta rays, white and black tip sharks, a box  fish and the much sought-after Mola Mola.

But what is Indonesia if you don’t climb a volcano. Our pick was the 3726m high “Gunung Rinjani” on Lombok. Sunrise at the summit and bathing in hot pools were the highlights of this three-day lasting trip.

To leave our cares once more behind we spent another several days on Gilli Air. Again we went scuba diving and enjoyed the excellent food. A novelty for us was to have a shower with salt water but we got used to that quickly. The day before we started heading home I found a small and grey bag in my backpack. It was our “world universal adaptor” that we had never used because Indonesia has the same plugs as Austria.