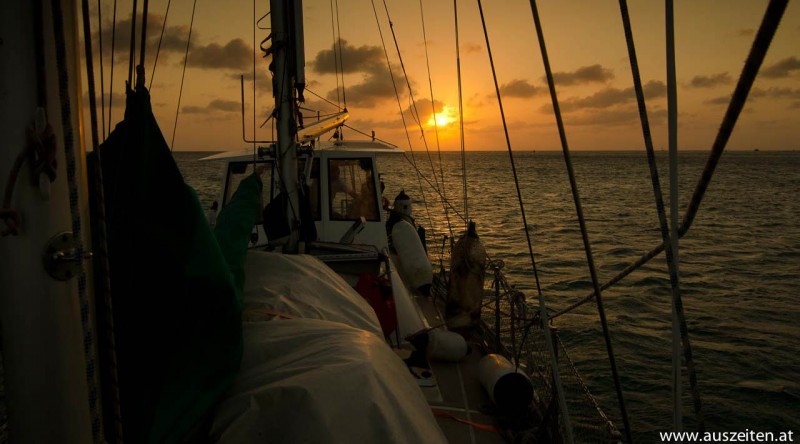 Curacao, Aruba, The Rock, Colombia – an adventure on a sailing boat

Touch down on Curacao was on time. Finally my sailing adventure was about to take off. I was going to spend the next weeks on board of the SY Marlin.  Satisfaction and a pleasant anticipation were spreading through my body while I was waiting a few minutes for Werner, Aneta and their kids, Amanda and Leo.

I only recognized how much gear I had amassed over the last months while putting it in the drawers of the front bunk. The following days past quickly and at a welcome barbecue I got to know a lot of interesting people like a family who was travelling since seven years and solitary persons sailing around the globe for a second time.

One time we just walked past the reception of one of the fancy hotels and had so the opportunity to enjoy the all-inclusive offers of the resort. Vodkalemon and burgers at the poolbar were only some of the hotel offers.

I got quite sunburned while washing the deck but after that we set sail for a bay in the north of Curacao. There we spent the night. Due to the long stay in the Marina of Curacao a lot of small shells and algae had grown on the hull of the ship. So Werner and I put on the scuba diving equipment and started to clean it. I was working directly beneath the ship, as suddenly breathing got harder and harder. A quick check of the pressure gauge showed that I had run out of air.  We had spare bottles on board so I was back under water soon after.

The crossing to Aruba was quite shaky. Fruits and vegetables stored in the nets of the saloon were rolling from left to right. In the beginning I was ok but from one minute to the other I got sick and nearly had to vomit. Apparently I was not 100% fit for a sea voyage. Just before arriving in Aruba the fishing rod was rattling. We caught a huge tuna. Fresh Sushi and tuna steak for the evening – not bad at all. Aruba itself is a very touristic island full of casinos and big resorts. We anchored in front of the Nikky Beach Resort and so had a good diving spot not far away. We used the Dinghi to get to the diving buoy and soon enjoyed the tranquility under water. Exploring a wrecked plane was good fun. Engines and the cockpit were still recognizable.

I wanted to go kiteboarding as well. I was told that the Fisherman Beach was good to  go. As I got there I found a spot with gusty offshore winds and only one other kiter. But he was Austrian and together we spent some good time riding. Unfortunately my rental kite lost its air again and so I had another hard time getting back to the shore. It is more than time to get my own gear.

When we anchored or stayed in a Marina Amanda had to “ go to school”. Aneta taught Maths, Werner a bit from everything and I did German. Our “letter-snake” got longer everyday.

From Aruba we sailed to “The Rock”. That’s a rock far off the coast of Venezuela used only by the military but sailors are allowed to spend some time there to gain new strength for the nightcrossing to “Capo de Vela” – Colombia. The departure was tricky due to the strong winds but Werner solved it with lots of skill. At night Werner and I did shifts so that everyone got at least some rest. We reached “ Capo de Vela” in the late morning and hit a rock in shallow waters wile looking for a place to anchor. We were lucky that there was no damage on the hull. There were only wind, sand and some huts on the beach and no possibility to change money so we continued after two days.

The plan was to take it easy and sail along the coast. We planed to anchor wherever we liked it but very strong onshore wind and two oil platforms with restricted areas forced us to navigate into open sea. We had to deal with big waves from the sides that crashed over board every now and then. Equipped with PFDs and always attached to the lifeline I could experience some nice big boat surfs. We didn’t dare to head for an unfamiliar harbor and so we had no other choice as to sail to the “Five Bays” directly. So I had to experience my second nighttrip. The high waves from the side kept coming until we reached deeper waters during the night. Water crashing over deck and the wind caused a very chilly night. To make matters worse there was a storm building up right next to us and a huge container ship passed us much to close for my liking.  Very tired we spotted the shore again at dawn and easily found the entrance to the third of the five bays. The landscape there is similar to the fjords of Norway – just gorgeous. There we only wanted to lie down and relax but soon after we were chased away by a boat of park rangers. I tried to explain them that we had had a hard night but they only allowed us to stay for some more hours. The rangers insisted that we head for Santa Marta before dark. So we had no other choice as to set sails again and cover the remaining 15 miles as fast as we could. The trip was easy and the showers in the marina of Santa Marta were worth the trouble.