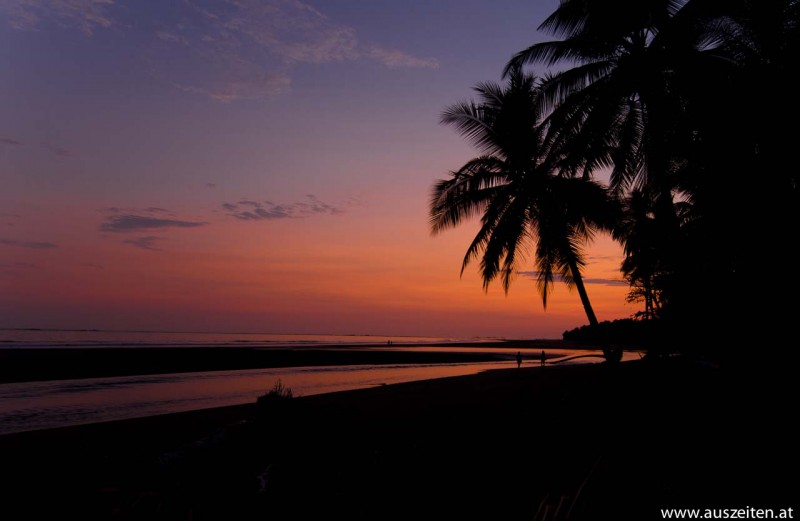 Costa Rica – traveling with two girls a and a new sport

One day I was paddling in Baeza but the following day I was riding a bus back to Quito – directly to the airport. I arrived on time and was one of the first in the check-in queue. I couldn’t hide my gleeful smile while talking to some guys from the UK who were on their way home hence I was about to board a plane bound for the next beautiful country.

The punishment followed immediately at the Check.in desk. “Sorry sir, but your Yellow Fever vaccination is not valid any longer. For Costa Rica you have to have an international certificate that is not older than five years“, informed me the lady. I had my shots eight years ago. I did not know that and so boarding was refused. The lady was so kind as to write down where and how I could have my vaccination updated. Really pissed I took the bus into Quito. The first clinic was closed as expected. I was knocking on the door like a maniac until someone opened. Unfortunately the doorman didn’t speak English at all and my Spanish was not that good enough to explain my misery. The moment I wanted to back off a doctor appeared. His name was Daniel and he spoke English but at his clinic vaccinations are only dome from Monday to Friday. It was Saturday. Damn! But he offered to drive me to another hospital with his car. There the next disappointment was waiting for me. Normally they would be offering vaccinations but just then they had run out of vaccine. But there was supposed to be a “Public Health Center” on the other side of town. So I thanked Daniel, jumped on a taxi and jammed me across Quito. After 90 minutes, I hadn’t eaten since early morning, I was dropped in front of a colonial-style built house. Around thirty people were queuing up. I imagined myself spending the whole night there as the securityguy asked me about my intensions. The moment I mentioned “Fibre Amarillo” he ushered me forward. I had no glue what he was thinking but believe me I did not care. Now I was facing the problem that I had to explain the nurse that she had to redate my vaccination date for at least ten days because only then the certificate would be valid. Some how I managed to do that. For sure I didn’t want to get the shot because the serum is effective for ten years. To keep the whole procedure look real I was stung with an empty injection. Soon after that I was a proud owner of a new international vaccination certificate. First problem was solved but I still needed a new flight. With all my gear I started looking for the TACA-office. Some taxi rides later I found it somewhere downtown but it was already closed. I couldn’t do it on the phone because every time I selected English the line broke down. The next taxi driver had to suffer because I had not eaten for a long time, as he wanted to charge me a higher price than we had negotiated. From an Internetcafe I wrote a message to Lisi and Bettina who were already waiting for me in Costa Rica. Depressed and really hungry I went to a hostal that was recommended by Daniel. Unfortunately the cabdriver got lost on the way and so I had another long odyssey. Finally I was heartily welcomed at the hostel and wrote an email to my travel agent immediately. Then I started looking for a restaurant what turned out to be quite difficult even with a map from the hostal. I found three very nice ones but looking at the menus made me turn around. They were ridiculous expensive. In the end I ended in a fast food restaurant where I got some soup, rice, potatoes and vegetables. While I was enjoying my exquisite dinner I gave my situation a second thought and came up with the conclusion that it is actually not that bad. Overall as I returned to my hostal I had a email in my inbox telling me that I got rebooked for the fifth March. So I had two more days to explore Quito.

The first day I strolled the streets of Quito together with an Austrian I had met at the bus stop, the second I started exploring the other direction. At the stadium I observed a gymclass. The kids were given a hard time. And so I found myself back on the airport quite quickly.

The check-in staff was the same as two days ago. They recognized me and couldn’t stop smiling. But I was in possession of a valid certificate and so boarding was no problem. With a 50 minutes delay I took of  for Costa Rica. There I met Lisi and Bettina the same evening.