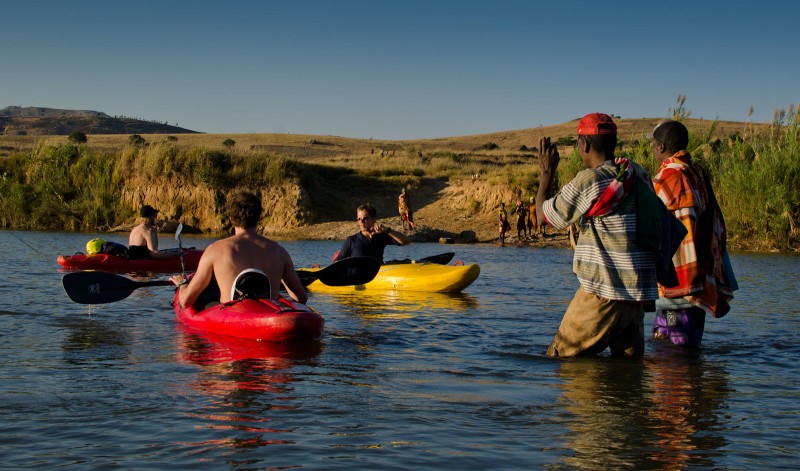 After eight kayaking trips to Norway I know the country quiet well, the alps are more or less dry from the middle of July until  the middle of September and there was only little snow in the Rocky mountains in last winter. The desire to explore something completely new convinced me to search for kayaking virgin soil. During a relaxed float on the Enns Chris, a friend of mine, who travelled in Madagascar with his bike in 2009 pointed out the likely kayaking potential of this island in the Indian Ocean. His pictures, the very few info from the net, the facts that it is the fourth biggest island, sparsely populated and has got 2900m high mountains convinced me that this destination is worth traveling.

Some calls and three like-minded friends were found. Kristof, Alex and Chris were keen immediately. Google Earth studies showed that most of the rivers are multidaytrips and the put-in and take-outs are hard to get to. During our internet research we bumped into Gilles Gaoutier, a French guy  owning the only rafting/trekking company on Madagascar. Gill helped us with the preparations and confirmed our assumption on put-ins, take-outs and the length of the rivers. In one of his mails he wrote ”If you come here for kayaking in the dry season you’ re going to paddle the big rivers and so be prepared to camp under the stars every night.“ We wanted to be independent of public transport so we tried to ship down an old 4WD.

On July16th, 2012 Alex, Chris and I flew to Paris, there we met Chris and on to Antanarivo the capital of Madagascar. The luggage conveyor band was not working so everything had to be handed on by hand. People were struggling when our kayaks came out weighing +37kg each. Two and a half hours later we finally checked in, at a hotel with all our gear. We used the following days to do further preparations, met Gill, got to know that our car had not arrived yet and suffered of diarrhea one after the other.

Our pick for the first river was the Ikopa, north-west of Tana. With a taxi-brousse, a Toyota Lightace, packed with people, we drove the 200km to a bridge over a tributary of the Ikopa. After six hours  in the taxi-brousse we started  loading our kayaks. People were eyeing us with astonishment and fear.

The paddle to the Ikopa turned out to be quiet a mission due to little water and very heavy kayaks. Only a few rapids needed scouting. In one of the bony rapids Alex broke his boat and it had to be taped. At the end of day one we hadn’t reached the Ikopa and as the road suddenly reappeared we knew that we had put in at a bridge too far upstream. 1 : 1 500 000 scale maps are not the real thing.

Finlly, after some hours of exhausting flatwater we reached the waterfalls at the confluence with the Ikopa. We paddled one or two slides but the rest had to be portaged. A sweaty work with kayaks weighing 37kg on the shoulders. But the view of the falls and the expectation of good whitewater compensated that. Some powerful rapids, the Ikopa had 150cm3 already, led us to our second beautiful campspot. The following days on the Ikopa were full of big water, friendly locals and long flat sections. One day as we slowly got hungry again people invited us in their bamboo-hut for rice and chicken.

After five days our supplies  were running low and we had to decide either to try to hike out to the road or continue to our planed take-out. After a night on an island we decided to paddle on and of course paddling was the right decision. We passed gold-diggers, hoping to make a fortune.

Suddenly the Ikopa started dropping again and for hours one rapid followed the other. Some of them were good to go, some on the chickenline only and some were definitely unrunable. We had to portage incredible waterfalls and in the evening as we already expected another night on the river we suddenly ended up in a lake, our take-out. After very spicy rice with chicken we happily hit the sleeping bags for the last time on the shore of the Ikopa. The first Austrian descent of the Ikopa was a success.

Over the days we drove back to Finarantsoa. We used Fina as base for a four day paddle on the Matsiatar. This river is easy to sum up: flatwater, crocs, only a couple of rapids, flatwater again and at the take-out a very scabby hotel. We pitched the tents on the bed being afraid of fleas and other animals.

On the ride back to Fina we had a stuck break. It took the driver 45 minutes to get rid of the break and so we continued with only three of them. Back in Fina we decided to go for one of our first descents. We chose the Matatana.

From Google Earth we knew that the put-in is in the middle of the jungle, after half of the river there is supposed to be a 150m-drop and the take out is at a bridge near the sea. Gill wanted to explore the area near the put-in for trekking possibilities and jumped on the possibility and sent some of his boys with us. So we rented a taxi-brousse special and tried to get as near to the put-in as possible. This didn’t proof easy. We got stuck in a mud-hole and had to use the car-jack to get the car out. Then we came to a bridge the driver didn’t dare to cross and so we had to get porters to get all our gear to the village. There we camped on the “soccerfield” and had an unbelievable starry sky. After tough negotiations with the porters we continued our journey to the put-in. First we walked on small paths next to rice fields and then we had to bash through the jungle for several hours. I was glad not to carry my kayak. Some leeches later we reached a tiny, manky looking stream – we had finally reached our river the Matatana. A porter sacrificed some rum to the river god to pay for our “fady” of taking red kayaks on the river. In the evening the boys had a good time jamming on the waterproof-boxes and showed us Europeans how much we lack any feeling for the rhythm. Under the stars in the middle of the jungle it really was something special.

Over the next two days we bushwhacked our way down the river and dragged our kayaks over rocks. While portaging a logjam I lost my camera box and it had to be rescued out of a nasty looking syphon. After 20mins of hard work I could get my hands on the handle and pulled it out.

Around noon of the second day I boofed a little drop and suddenly my jaw went slack. The river disappeared over an edge. I jumped out of my kayak and immediately recognized the drop from Google Earth. Only that it was not 150m high as expected but rather 450m.  A quick look at the riverine vegetation told us that we had to prepare for a long and exhausting portage. The rest of the day we dragged, carried, pushed and pulled our kayaks 450m downhill and quite a few uphill. We met one or two locals and for sure they believed us to be complete nutters. We ate some sugar-cane on the way to get some power back and only then found time to admire the stunning landscape.  In the evening, after a well-deserved bath in the river we said good-bye to Gill’s boys and paddled on, the next day hoping for good white water. But for two days, there where only very few rapids and so we decided to call our first descent a day. We reached the village of Ifanirea by paddling a tributary upstream and jumped on the first 4WD we could get our hands on. To get back to Fina we jumped on the train in Manankara. This was a twelve-hour pain in the arse ride.

Back in Fina we decided to become tourist and drove to Anakau, a tiny beach-village on the west coast. We surfed, went whale watching in a tiny dug-out and ate a lot of superb seafood.

On the way back we visited Isalo National Park and then packed our kayaks one more time. We wanted to paddle the lower Namorona.

Together with the Ikopa, this river is the highlight of our trip. Easy logistic, many rapids, only a few portages, the one or the other drop, beautiful campsites with plenty of firewood and only little flatwater characterize this part of the Namorona. People on shore were extremely friendly and helpful. Often they offered us fruits and at the take-out we had to wait for 30 hours for a taxi-brousse but were invited to a local home immediately.

After seven weeks it was time to say good-bye to this interesting island.

Thanks to Ophion Paddles for their great support.